Today was tidy up day in the garden, among other things. I finished planting out the salad leaves, and beetroot. Then I sowed, also in the cold frame, curled parsley, and some winter lettuce, seeds that I had over from last year, we shall see what comes up. I followed this with tidying the garden, putting away a lot of summer things into the potting shed, also took measurements as need to get a light tar paper to attach to some of the outside of the shed. It is one of the jobs that I have had on the list for over a year but did not get around to. I finished outside with putting some stray pots of herbs like basil into the cold frame to overwinter. The table and chairs which we only used once or twice during the bad summer remain on the patio for the moment, not that I expect to use them to eat outside, but because there is a container of sweet peas on top and some other plants. 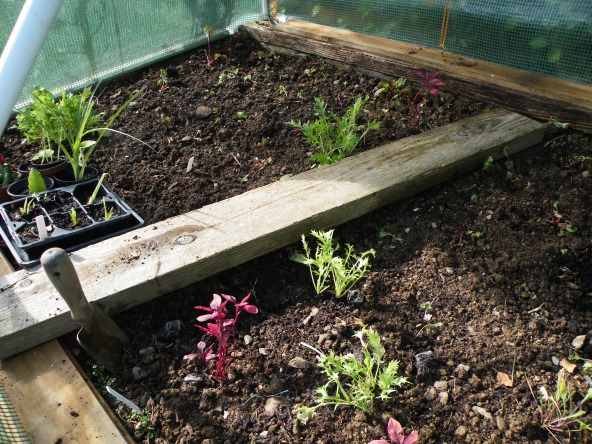 I am reading this brilliant memoir by Joy Larkcom, it’s a large work, so interesting.  She fills the pages with so much information about the history of vegetable growing in Europe.  She also talks about the year she and her young family spent travelling around Europe in the seventies, exploring what vegetables were being grown and used and writing about this, also collecting seeds and much more.  I have now nearly read half of the book and am still enthralled and learning some bits.  It is also interesting to see how the author discovered growing organically.  At the moment, every night I go to sleep with my head full of these stories, it is a great ‘down to earth’ sort of thing to read after the long discussions with my partner about the current state of the world. 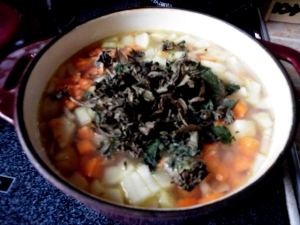 Soup being cooked, vegetables copped and heaped up with dandelion, nettles, garlic, cumin and other herbs and spices.  Next the resulting goodness, very tasty, this is food I really like.

A calm moment after work outside.  The poppies have almost all finished flowering and the seed heads are very decorative inside the house.

8 thoughts on “AUTUMN JOBS IN THE GARDEN”