Even though I only wrote these observations the other day, I have gleaned more information today that I would like to add to this blog entry as it is relevant. As well as that, some of my dear blogger friends have asked me questions about the water situation in relation to farming and growing crops which I have tried to answer, but I am constantly learning more about the situation on Gozo and so I want to update my writing, it is still only my own observations, and they will change as I learn more about this beautiful and attractive island. Thank you to Lydia (Lyart) and Mary Tang for asking me questions which made me think deeper and search for more answers.

Ever since we came to the Maltese islands nearly two months ago I have been looking for signs of agricultural activity, and in particular have I wondered if there were people practicing permaculture, or growing vegetables organically. I have looked for signs, asked around and checked the internet, and slowly I am forming a picture of what is happening on this front here on Gozo. I think from what I gather from the papers that back in 2008 some people wanted to see Gozo turn into an ecological island, growing crops organically, preserving water and stone, but there are many challenges and they are not easily overcome, and I don’t think much progress has been made, but don’t take my word for it. I am only observing, one needs to be longer in a country to be sure of what the real story is, what the problems are, and what progress is being made. I did see quite a few crops even this early in spring, the grains such as barley or oats seem to have been harvested already. Large cabbages were in some of the small fields, as were plenty of onions. When we came early in March the vineyards were still looking very bare, but now they are beautifully green and flourishing despite the drought. Yes, it actually has not rained here since the New Year, you can see some of the wild plants are wilting, and growth is stunted.  From what I notice there are a lot of small farms, or areas for growing crops, apparently there are not that many full time farmers on Gozo, but quite a few part-timers, people who have inherited farmland and work the land as a matter of course.  It is very noticeable when travelling around the island that an effort is being made to utilise every bit of available land to grow crops.   But today we had a chat with a local woman at Dwejra, she gave us information about the small farmer, the ordinary householder who will have a garden full of vegetables, will keep chickens for the eggs, will grow plenty of tomatoes, and some of those who have more land will even grow some grapes for wine making.  She told us that when the produce was plentiful people would share out to family and friend, a practise which is age old and so sensible and to be appreciated. 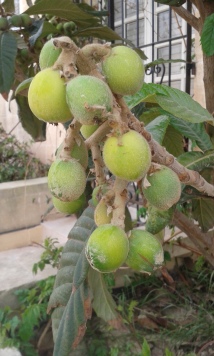 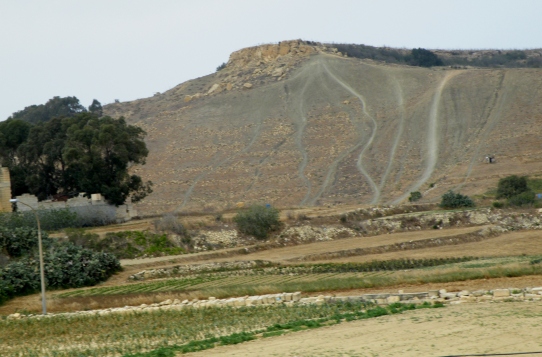 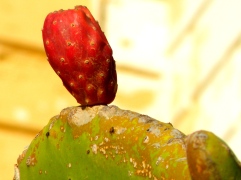 The prickly pear is used in jam and liqueur making, the local wines are delicious.

Some of the soil is very stony, just like it is in Ireland!  Of course seeing that it is a very dry climate here, the soil everywhere I looked was totally dried out, still the crops looked fresh and full of foliage, when items are planted the Gozitans make a bit of a pit and put the plant in there and water it, this keeps the plant more moist and preserves the water I guess.  The darker the earth, the more fertile it is.

On the water questions, many of the people on Gozo use their own wells, but the water table is becoming lower and lower because of the lack of rain. The Maltese islands do have a problem with drought, they get their water for a certain percentage from wells and the rest from desalination using electricity to transform it. Small organic farms may still be possible but there are other factors to consider, when it does rain there is often flooding. A lot of area on the island is urbanised but not enough water is collected and stored in cisterns (I read recently).  According to our local source the ground water is being depleted, which is not surprising when there is not enough rain to replenish it and at the same time there is more tourism and this industry uses a lot more water than does local living, what with swimming pools and many more people actually utilising water.  I am sure that there is much more to be said and thought about with regard to water provision and regulation, that I do not know about.  Gozo does have water reservoirs, and I read that there is constantly improvement being done. Check this document too http://www.fao.org/3/a-a0994e.pdf

This is a farm where, we were told are cows but we did not see any and were told that the cows are kept inside here on Gozo, not sure if this is true but I did not see more than two or three cows outside.  Some of the milk is imported from Italy.  There is excellent sheeps cheese produced on Gozo, a favourite of mine.  I also saw goats but was not able, so far, to source goats milk.

There is great potential for permaculture, and for growing vegetables, crops and vines without using pesticides and fertilizers, imagine what it could mean for Gozo if it became know for its pure and healthy food production, as there is a growing market for such produce all over Europe, and as the Maltese islands would not be at a danger of becoming contaminated with genetically modified pollination once seeds are kept out of the islands, this could be an ecological paradise.

26 thoughts on “MY OBSERVATIONS ON THE LAND”