Sunday is my day of rest, I indulge in all sort of frivolous pastimes. Of late I have taken an interest in recycling crockery, our town here has six charity shops and there is always something to find, some treasure. I like to buy cups and saucers with patterns in blue and white, they look clean and cool. So I snapped some photos of my acquisitions.

The fine blue flowers of this cup look delicate against the shiny white porcelain, I found the cup and saucer separate from the plate, this was lucky.  The porcelain was made in Bavaria, Germany.  It’s called Winterling Renaissance Pattern China.  I use it everyday as I do not believe in saving or storing things away. 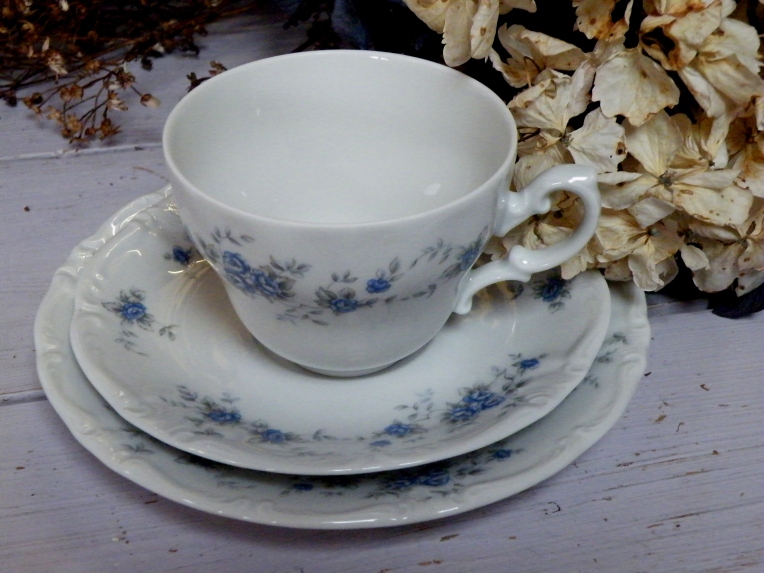 Some of the other cups and saucers I obtained were made in England, in Staffordshire and they are Ironstone.  It is a type of vitreous pottery, it was  first made in the early 19th century.  You can plainly see that it is different from the Bavarian porcelain, more robust, but I like both.  They are called Ironstone because of their durability.

I particularly like this design, it’s also Ironstone, made in England.  For some reason my grandfather in Belgium had a tea set of this, the cups are larger than average and I remember the black coffee that was poured out of the everlasting ‘koffiepot’ which was constantly on the stove brewing, the coffee beans having been grinded in a ‘koffiemolen’, and put in a cotton bag that was hanging in the pot, a delicious aroma filling the room.  Good memories.

Here is another fine pure white cup and saucer, incredibly I found both cup and saucer separately again.  It is a rather small cup and it has no markings on it whatsoever.

More Ironstone ware, all found separately and paid less than €1 for the lot.  They get used everyday, and great pleasure is got from the colour combination and a cheerful table setting.

Here are a selection of plates and saucers.  The colourful porcelain plate has markings which places it in Bohemia.  The others are English Ironstone.

I particularly like the idea of recycling as much as we can, it’s fun looking for the stuff, and it really does save resources of the planet.  Seeing that a town of 2000 people can have six charity shops where people constantly get rid of their surplus ‘stuff’ it shows that there is an enormous amount of surplus around.  Re-using things is a good idea.

Apart from all that, I must say that I really enjoy hunting around in the charity shops, having decided that I need such and such items.  At this moment I am still on the look out for blue and white patterned crockery, it will give me innocent pleasure for a while yet.

37 thoughts on “RECYCLING AND THINGS VINTAGE”