A little journey to visit Marsalforn today, an apparent busy tourist place in the North-East of the island, where the apartment buildings greet you as you get closer to the sea and the promenade.  The narrow little streets of the older village are quant and more interesting.  The sea itself is so blue and transparent, and to the north of the harbour you can still see some fishing boats and nets.  It is only a few minutes bus drive from Victoria, which is the capital of Gozo and lies in the middle of the island.  Every place on Gozo is close by each other, a short bus drive and you are there.

I discovered a few colourful and beautiful sights while there today.  I saw that the reddish fishing nets they had in Marsaxlokk, Malta were being used here too, and baskets to catch octopus, as far as I know.  While walking in among some of the apartment blocks I then came across the little yellow Oxalis Pes-Caprae flowers, and a few of the Sulla flowers which brighten everything with their beautiful shade of red.

On the way to Marsalforn I saw some signs of agricultural practices, this I am very interested in, Gozo has suffered drought for a few months now and everything does look very dry, though the neatly ordered rows of vegetables, I saw lots of onions, looked healthy enough.  The hay had been harvested too in lots of fields.  I want to explore this further, what is being grown, produced and so on.  I did see quite a few vine yards but they were smaller than in Malta.  The grapes are delicious here though.  I know that a lot of wells are being used to water the land, but also that the mains water comes from desalination of seawater, I want to find out more about all this. 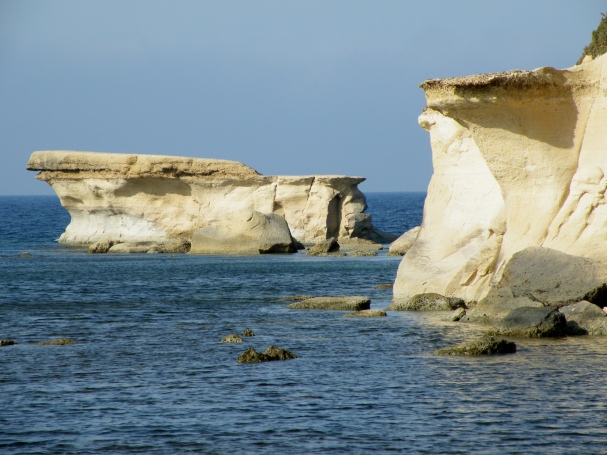 The views out to sea along some of the coast are impressive with the limestone eroded in all sort of shapes.  . 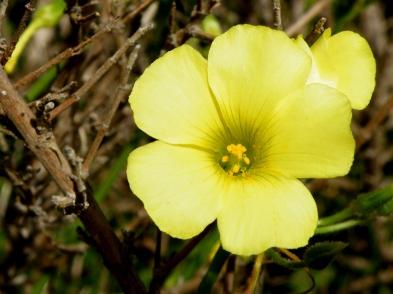 One of the stones of which newly built walls were made near the dried out river in the town, in this limestone I could see crystals if that is possible, very beautiful and intriguing.  These type of walls you see all over Gozo and in Malta too, they used to be erected to prevent erosion but also of course to divide the land.  I think they look so lovely, all the white limestone pilled up on each other.  The wall I came across in Marsalforn was a new one, but I believe that the older types are now under the protection of the Heritage rules.

Though I was not that impressed with the touristy area of this town, we are going to go back and explore the older town and beyond, beyond is where the salt pans are and some other villages, I am curious!  More to come on that part of Gozo.