We recently had an archaeological dig here at Skibbereen in West Cork. The work was undertaken by students of the university of Maryland in US, under the supervision of their professor Stephen Brighton and Drew Webster.
Seems that during the 19th century there was a lot of activity going on at the site of the  Rock, which towers above the town of Skibbereen behind the town hall and the houses of North street and High street. It was called Windmill hill. Prior to the structures hewn out from the rocks being used as houses, six of them, the place was probably used for industry, perhaps related to the windmill. The houses would probably have had grass roofs at first Dr S.Brighton told me, you can see where timbers had been inserted into the rock. It’s a very interesting site. By the time I reached it and made photos, the students were filling in the sights again after six weeks of excavations. Artefacts were found at the site, like potsherds and other bits and pieces. Please visit the Facebook site for more photos and information. And also the WordPress.com site at:
Archaeology of the Irish Diaspora and Modern Ireland 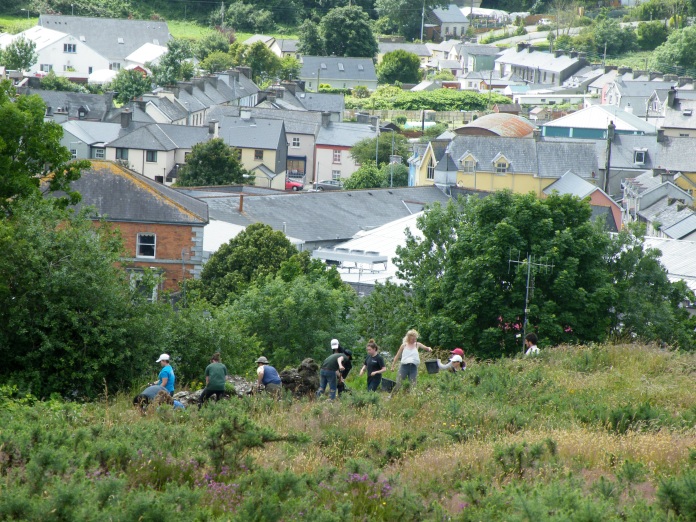 Where the dig is situated above the town of Skibbereen 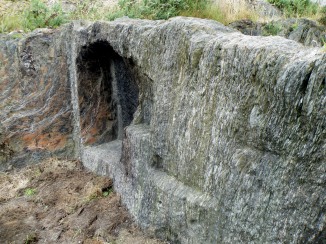 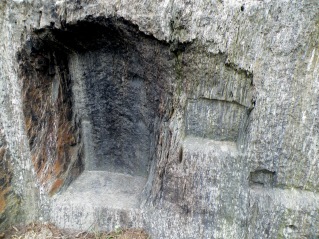 Seen here are what is thought to be indentations where timber would have been fitted, probably for industrial purposes when these sites were used previous to when people were living here in the 19th century.

More indentations seen in the rocks and pieces hewed out.  This site has been filled in again by the students.

The type of rock found here, slate or shale.  And students at work.

More sites of the houses, there were six in total.  The floors of the houses consisted of flat rock, and a drain would have been hacked out in the ground to allow water running from the rock behind to drain away from the house.  It must have been uncomfortable living quarters.  Who lived there?  It’s quite an exposed area of Skibbereen, but high up and far away from the flooding which sometimes afflicted the town.  Then again as there was a windmill a few meters away from this site, there must have been work available for people.  A lane (Windmill lane) is there still today and one wonders if this lane linked up to other boreens (Irish for lane) in the area.  The houses were inhabited at the time of the Irish potato famine 1847-49, one can only wonder at what tragedy played out here among these rocks as the famine claimed so many lives here.

It’s all very interesting and I will hope to find out more.

This overgrown site is where the windmill would have stood.  It is only a few meters away from the ruins of the houses.

10 thoughts on “AN INTERESTING DIG IN SKIBBEREEN”