I have written up my report on my soil experiment, as part of a course I took early in the year,  ‘CITIZEN SCIENCE: LIVING SOILS, GROWING FOOD’ with the university of Dundee and Grow Observatory.  Its a long enough read but I thought to include it anyway in this blog post as some people showed an interest in my results.  So here goes.
My question was: What will give a better crop? If I use compost from the garden compost bin, to improve both the fertility and the texture of my clay soil.  Or if I use a combination of leaf mould and organic seaweed liquid?
My hypothesis was: Using compost will improve clay soil, & may result in a better edible yield of produce.
Measurements: Yield of edible produce as weight (grams/ square meters), and seeing that I am also testing the effect the experiment has on my clay soil texture – my measurement will include testing soil texture before and after the experiment. I will also measure the Ph. and nutritional readings (nitrogen/potassium/phosphorus measured against the original texture readings/findings). I will use home testing equipment. For soil texture testing I will use the ‘Field Texture Grade classification chart’ after doing the Bolus test.
Variables: Varying effects of pests invading the plots differently, perhaps some plants dying as a result. So one of the variables will be competition from pests.

My procedure:
I plan to grow a total of 12 bean plants in each plot, as they will be planted 30cm apart with 60cm between I can fit those 12 plants in half of each raised bed and keep the other half as a control with nothing growing on it. The radish and spinach I will grow in between the bean plants, 4 of each. Dimensions of my raised bed are 1.20m by 2.20m so this will just about do it.
OBSERVATIONS BEFORE THE EXPERIMENT STARTS
The soil in both my plots smells good, perhaps a little sweeter in Plot 1 than in Plot 2. When I made a Bolus of the soil in each plot they were the same. The plots have a moisture content between 1.5 and 3 indicating that the soil is fairly dry.
Readings of soil nutrients before experiment:
Nitrogen: deficient in Plot 1 and depleted in Plot 2.
Phosphorus: deficient in Plot 1 and deficient in Plot 2.
Potash: adequate in Plot 1 and adequate in Plot 2.

There is a slight difference in the two plots, Plot 1 had a light reading of 1000 units while in Plot 2 the reading was 2000m – both plots were overshadowed by a tree, but differently. Plot two receives the evening sun, whereas Plot 1 receives the morning sun.
Moisture content was also different in the two plots, in plot 1 it was 2 units whereas in plot 2 it was 3.1 units. So plot 2 was wetter.
The PH was 7.5 in plot 1, and 7 in plot 2 – Meaning that the soil in both plots is quite alkaline.
The result of the bolus test showed that the soil in both beds, according to the ‘Field Texturing of Soils Table’, is a light clay, with a plastic bolus, smooth to touch. 35 to 40% of clay contend.
Beginning of experiment;
On the 8th of May my Plot 1 and Plot 2 were ready to have the allocated fertilizers added. It turned out to be a dry and warmer than usual summer here in West Cork. For some part of the summer there was a ban on watering the gardens, so plants did suffer, they easily bolted. Some things did not grow at all or very little.  Plot 1 was treated with compost from my home compost bin, and Plot 2 received leaf mould and would be given liquid seaweed compost on a regular basis.
I planted out my bean seedlings (Climbing French Beans – Cobra), on 22nd of May. The soil temperature was already between 13 and 15C. The air temperature was around 22C at noon. We had no precipitation for the week following planting, but I watered the garden with rain water once a day. Slugs were a slight problem so I put out beer in trays. I sowed the spinach (Spinach Matador) in trays. The following week we received 2.5mm rain.
On the sixth of June – no precipitation, watering by hand. The beans in Plot 1 started to grow and were doing ok. The beans in Plot 2 did not grow or do well. They received seaweed liquid feed once a week (2tops in 6ltr of water as recommended). I planted out the spinach seedlings. I threw organic slug pellets and picked off the slugs every evening as there was some slug damage. Still no rain but watering garden daily. Temperature 20C at noon. Some of the time overcast but warm. By the 12th of June Plot 2 beans were doing ok too but definitely behind Plot 1. Spinach bolted as soon as they were planted out. On 14th of June we had a storm and the plants received some storm damage. Temperature went down to 18C. By 21st of June the beans in Plot 1 were 82cm high but only 43cm in Plot 2. There had been no sun for 5 days. Still no rain. Ban on using water hose in garden. I used all grey water to keep beans and spinach watered. Slugs had disappeared. Moisture levels were 2 in Plot 1 and 2.5 in Plot 2. Temperature was still 18C and precipitation was still at nil.
One month later; on 21st of July, the results were as follows: Moisture in both plots did not even reach 1. Temperature reached close to 30C in the sun and 25.7 in the shade. Soil temperature reached 21C in plot 1 and 19C in plot 2. I found some slug damage in both plots.
Harvesting:
On 28th of August the temperature had dropped to 14C with precipitation of 25mm in 24hrs. I harvested overall 800gr of beans in plot 1 and 300gr in plot 2.
Readings of nutrients in the soil after harvesting:
Nitrogen: depleted in plot 1. Depleted in plot 2 and depleted in controls of both plots.
Phosphorus: depleted in plot 1 adequate in control of plot 1. Depleted in plot 2 and its control plot.
Potash: adequate in plot 1 but depleted in its control plot. Adequate in plot 2 but deficient in its control plot.
PH: 7 for plot 1 and 7.5 for its control plot. 7 for plot 2 and 4.5 for its control plot. (I cannot explain why there should be such a difference between the readings of Plot 2 in the Ph. of the control plot.)

To answer my experiment’s question regarding the soil texture:
I have come to the conclusion that my Hypothesis “using compost will improve clay soil, and may result in a greater yield” is true, I can say this because the yield of Plot 1 was 800gr, whereas the yield in Plot 2, which was 300gr, shows that Plot 2 produced 62.5% less in relation to Plot 1, which I think is significant.
As well as that, and all though the soil texture test of both Plot 1 and Plot 2 resulted in similar readings before the experiment (light clay), I did detect a slight improvement in the soil of Plot 1, and I would say that, using the ‘Field Texture of Soil Table, my soil now has perhaps only 30 to 35% of clay contend, instead of the 35-40% before the experiment – that is in Plot 1, which received the compost from the garden composter. It can now be categorised as ‘Silty Clay Loam’ instead of Light Clay.

And my question regarding the fertility of the soil:  Here my hypothesis was that the compost of the compost bin would improve the fertility of the soil versus using a combination of leaf mould and organic seaweed liquid.  And here I did not immediately see results because after harvest, both nitrogen and Phosphorus were found to be depleted in the soil of both plots.  Potash was found to be depleted in Plot 1 and deficient in Plot 2.  The produce was very poor in plot 2 as was some of the growth.  Growth and produce were better in Plot 1 but still the harvest was rather poor.   I think both plots are still very lacking in nutrients and need more manure/compost or leaf mould before I can come to a conclusion on fertility.

Variables noted:
The spinach totally bolted as soon as they were planted out, and for this reason I have left it out of the experiment results.
The slugs did about the same damage in both plots, but they did eat more leaves of my bean plants in Plot 2. I did find that, because of the leaf mould there was much less weed growth in Plot 2 than in Plot 1, it might have.
It was a warmer and dryer summer than is usual here, did this have an effect on the results of my experiment? Did I water enough?

My findings and final conclusions:
So the soil in both plots are after harvesting depleted in nitrogen, phosphorus and to a lesser extend in potash.  But the nutritional value of my soil was quite poor even before growing my beans (and I would have thought that bean would have improved the nitrogen in the soil).   It is therefore obvious that if I want a better crop I need to improve the nutritional value of my soil and using organic compost would be the wisest decision, and in addition it will improve texture of my light clay/silty clay loam soil.  I have now been offered horse manure, additionally I have purchased a different type of organic seaweed fertilizer having good percentages of the missing nutrients. And I plan to make use of the plentiful comfrey plants that grow in one of my raised beds, eggshells and coffee grounds are also going to help.  Some of my beds, those that don’t have winter vegetables growing on them, I will seed with green manure, all this to improve my soil.
I want to make a note that I did not add enough leaf mould to my Plot 2 and I wonder if this could have contributed to a poorer overall result in that Plot.
I think that this experiment has been a great learning curve. I would definitely take on board its findings, but perhaps with reservations. I do believe that I learnt a lot doing this, and it was very enjoyable, I also included my grandchildren in to the testing work, they loved it too. 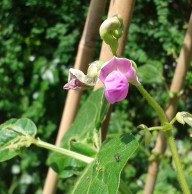 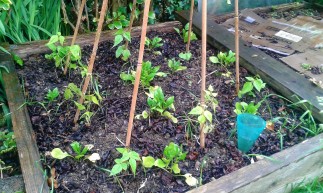 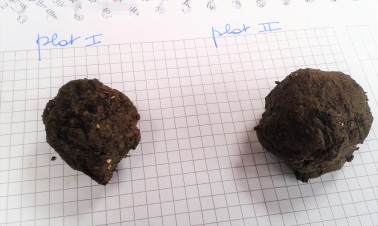 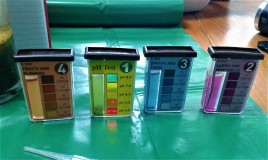 37 thoughts on “MY SOIL EXPERIMENT ENDED”